First, buy an old Gameboy. I found there were lots of old iterations, and it wasn’t as easy as I thought to find one that was of the first generation.

One ebay later, I broke open a dirty yellowed case and was surprised to find a lot of hardware inside. I suppose I was just expecting an integrated chip on a high-density board. 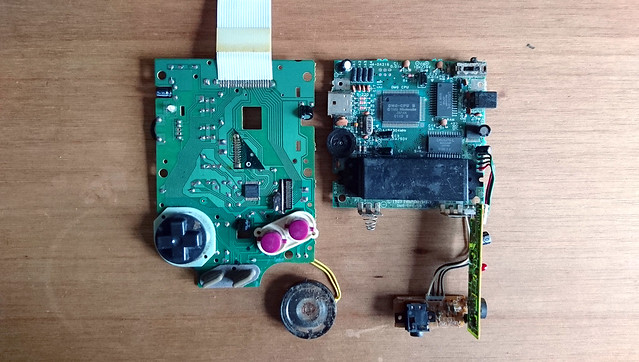 There’s four boards in total, one has the controls and the connection for the screen (DMGLCD on the left – the ribbon that connects to the screen is snipped off already in this pic). There’s a little loudspeaker attached too. It’s pretty much single-sided.

The other main board (DMGCPU) has got the processor and memory on it, along with the socket for the carts (the black rectangular thing on the right-hand board), the battery connectors, the multitap connector and a couple of other switches and dials. This is a double-sided board, with components on both sides.

The other two boards are a power supply and a headphone output. 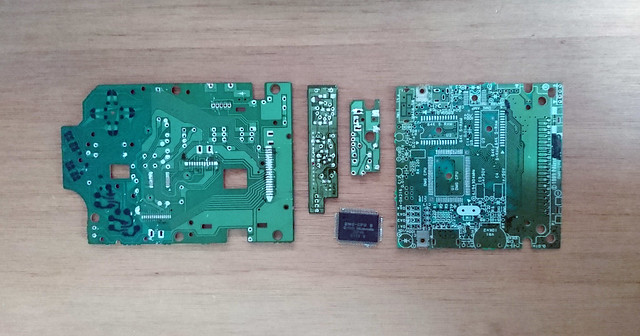 To strip the boards, I bake them for a couple of minutes in the oven, then pull them out and bash them upside down until the components fall off.

Some of the components will melt, burn, or explode (electrolytic caps for instance) if they go in the oven, so I snip them off beforehand, and make sure the leftover wires get shaken out.

Most of the solder comes off with a good shake too, but I use a soldering iron to clean up, and smooth down any sharp points.

Give them a good scrub and wash with soap and water, and they’re ready for scanning.

Scan, and faff on with the image to get good contrast, align both sides into a stack and correct any distortions that have crept in. 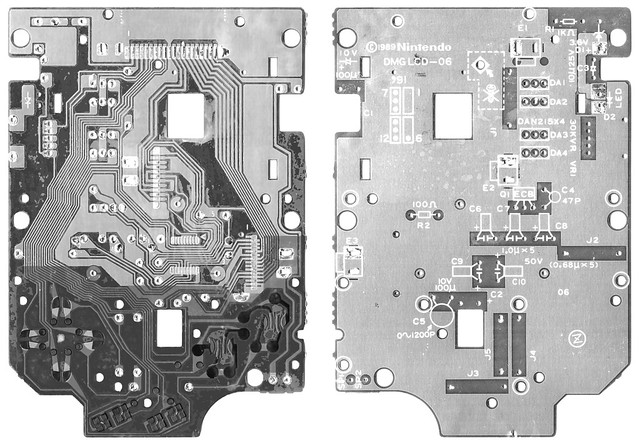 Import the bitmaps into a vector drawing tool, and start tracing.

It’s possible to autotrace this kind of thing, but I’ve never found it to be accurate enough to get across the consistency and sharpness of the real thing. Overall you get a good impression, especially at a distance, but it’s not the same close up.

The main reason for laying out the circuits by hand is to do with the heritage and origin of the Circuit Portraits project. This is a project about the designers of the boards, rather than the boards themselves. By applying the concentration that’s needed to lay out these traces one by one, I’m paying tribute to the effort that the original engineer put into it.

It’s not the same of course – the original engineer had to design the circuit at the same time as lay it out, had to work within the constraints of the component positions, as well be aware of all the design rules around the electrical circuit, radio frequency interference, manufacturability and robustness.

I just copy what I see. It’s not the same, but mechanically, the physical action is the same.

For each side, I separate the features into copper tracks: 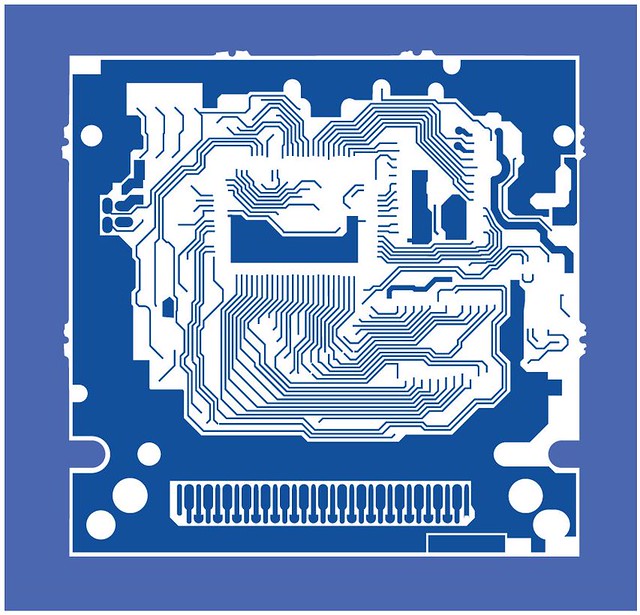 Which are the areas actually printed in copper onto the circuitboards. These shapes are a mixture of signal traces and “pour” areas. Those are large, low-resistance areas, usually ground planes. On the board, these are usually covered with a green solder mask.

The other features are exposed pads, which are tinned areas of copper that is not covered by the solder mask. These are areas that components are soldered to. In the Gameboy there’s two kinds of components: Through-hole and surface-mount. 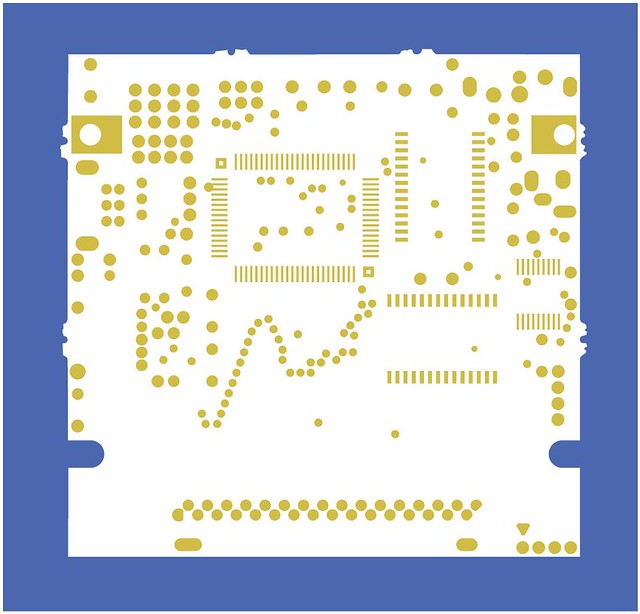 Through-hole components have wires sticking out of them, that go through holes in the boards, and then the holes get filled with solder. The row of holes at the bottom of the board above is for through-hole components, specifically it’s for the socket for the gamepaks. Through-hole is often used for connectors because it tends to be stronger.

The sets of rectangular pads on the board are where surface-mount components are fixed – the CPU and the memory chips are surface-mount. They are just fastened down with tiny blobs of solder on each of the legs of the component.

The two rectangular pads in the top-left and top-right of the board are exposed pads, but they aren’t for any soldering. They’re usually left like that for some kind of mechanical conduction – there’s a screw through the holes, and they’ll couple the ground plane to the chassis or some shielding.

Last feature (which I normally trace out first) is the holes and vias. 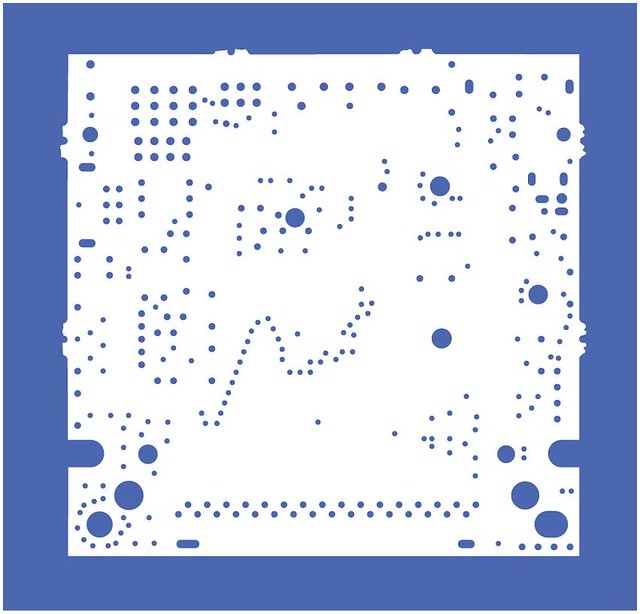 Some holes are for components to go through, but many are vias – this is a hole through the board that is filled with copper or solder, and carries a signal from one side of the board to the other. There’s a wavy line of these right in the middle of this board, that carry the signal on that buss through to the other side – where they’re actually routed to the gamepak socket. 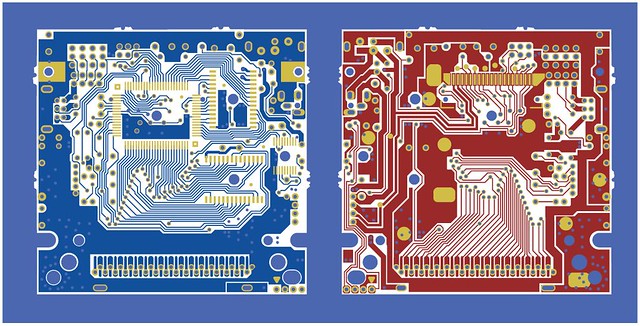 So that’s the artwork copied. The boards can finally be retired – they have served humankind well.

Now I’ve got some composition to do. Some boards look great with their layers stacked – others look like a mess. I didn’t like the way the DMG boards looked stacked, so decided to make a more simple print showing only one side of each of the two main boards.

There’s some interpretation here, and that’s part of the project too: re-presenting these engineering artefacts as aesthetic evocations. I tried lots of different layouts and mixtures, and settled on a pattern that showed both boards, along with the the pattern of pads that hold the ribbon cable that links the two boards.

Importantly, the controls (buttons and D-pad) are obvious.

I get each layer (copper / pads / holes) printed onto film by squeegeeandink.com, and then expose those film positives against a silkscreen that’s coated in a light-sensitive emulsion.

Wash the screen out, and what’s left behind is a stencil. After that it’s screen printing as usual. I print myself, manually in the printshop in the basement of the building where my studio is.

And that’s another story!